The holidays are here! While many are more than willing to open their pockets to get the best presents for their loved ones, not everyone is keen on gifting a new, sparkling car. That’s why car brands have to double their efforts in persuading their customers to open their hearts and wallets wider. Their effort is often reflected in the holiday car ads they make, some of which give valuable marketing insights to auto dealers and all sorts of businessmen for that matter.

Here are three holiday car ads that made us pause and think, “More brands should do that!”

Honda kicked off their holiday car ads early this year, with the first video released barely two weeks from the start of November. While the ads themselves aren’t anything spectacular, the marketing tactics behind them are noteworthy.

Aside from giving a nice discount to buyers, Honda encourages prospects to tweet #XOXOBolton for a chance to be personally greeted and serenaded by Michael Bolton himself. Honda released a series of this ad to ingrain its theme and message in their viewers’ minds and hearts.

The lesson: you should always start your holiday campaign early. Make your presence known not only through simple print, radio, or TV ads, but, more importantly, on social media where many of your prospective customers hang out.

Holiday car ads tend to focus on making their product a desirable Christmas gift. Infiniti veers away from that stereotype by producing funny ads that put them on a higher ground over their competitors (i.e., BMW).

The lesson: Just because it’s the holiday season doesn’t mean your car ad should focus on Christmas and gift-giving. In fact, appealing to your audience in a refreshing and more entertaining way can differentiate you from your competitors.. If you can do it without blatantly trying to knock down competitors, that will be even better.

The holiday season generally coincides with the peak of winter, but many car brands show their products racing through snow-covered highways—a daredevil act that common folks should never try. 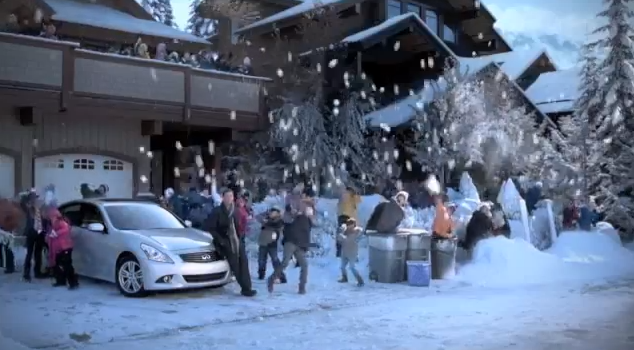 In its 2010 ad, Acura reminds its viewers and prospective customers to drive safely, lest they hit or run over other vehicles such as Santa’s sleigh. Acura further highlights the MDX’s Collision Mitigation Braking System, which helps reduce or perhaps eliminate the risks of a frontal impact.

The lesson: Don’t just focus on your product’s appearance; highlight what it can do. Don’t make it all about your product; your customer’s satisfaction and well-being should be top priority.

The holiday season can be a tough time for auto dealers. However, by creating witty holiday car ads and employing a thorough marketing plan both offline and online, you will certainly be able to win over people’s hearts and wallets.