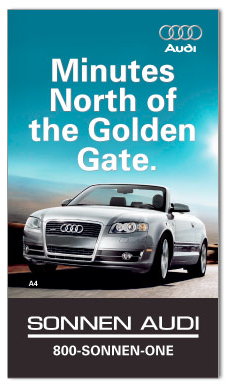 Billboard Advertising for the Automotive Industry

If there is an industry that successfully utilizes billboard marketing, it is assuredly the automobile industry.

Billboards have a number of key marketing strengths the auto industry has exploited to connect with the millions of motorists on U.S. roads.

Billboards are not intended as a primary marketing technique, but rather a brand enhancement tool and a teaser for more robust marketing mediums.

Generally, the auto industry uses these techniques when creating their billboard advertisements.

(Pictured Left: Palmer in Action. We created this billboard for Sonnen Audi, a dealership located outside of San Francisco in San Rafael, California.  The goal of the campaign was to increase San Francisco sales.)

Six words or less: The typical driver will spend only a few seconds looking at a billboard, so any text should be easily captured and digested.  For most people this translates into a phrase with six words or less.  More than this and the driver ignores the text portion or they fail to recognize the message.  In any case, the marketing message should be as impactful as possible within these constraints. A good example of this is the Honda Accord’s “All-new, still brilliant” billboard. 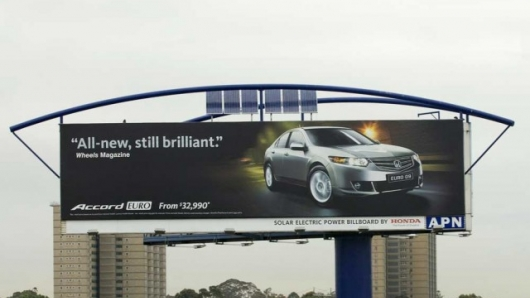 Intelligent messages:  Most consumers get a constant barrage of ads on the Internet, in print and through their entertainment portals, so in order to get noticed and pique the interest of the consumer, the billboard must provide a terse but catchy message.  The auto industry has the luxury of investing large sums of money into their marketing campaigns and that investment often translates into memorable billboards.  One of the most notable is BMW’s “Checkmate” ad, which was an industry inside joke and response to Audi’s “Your move, BMW” ad.

Intriguing image:  The visual is usually the entire story for a billboard.  Although studies show six seconds is the average a driver devotes to a billboard, most drivers still won’t notice them unless there is something visually distinctive.  Luckily the roads are the perfect environment to try to market a vehicle and automobile companies recognize this.  They often provide vibrant, stunning images in contrast to most of the cars the driver is currently observing.

Creativity sells:  Billboards have been reinvented in recent years as marketing companies have tried to revitalize a staid concept.  This has helped pave the way for innovative new technologies and marketing gimmicks.  Digital billboards have become popular for their bright and eye-catching signs.  Companies like Chik-fil-A have utilized three-dimensional billboards with figures that project out of the surface of the billboard.  These concepts have grabbed the attention of consumers through their novelty, and auto companies have followed suit. Ford enhanced their billboards to great effect by using a smoke machine to add a special effect for their Mustang peeling away.

The billboard is likely to remain an important fixture of the roads, but it takes innovation and a keen marketing mind to fully leverage all of its strengths.

Following the intelligent examples of the auto industry is likely to prove beneficial if your company is eager to use billboards.

Learn how to best market your dealership in our latest eBook. >>>