At Palmer, we know that if you were to list some of the most exciting things in life, banking probably isn't one of them. But who’s to say it has to be that way?

By working with our clients to identify unique ways to reach their target demographics, we have a proven track record financial services marketing that’s actually, well, interesting.

To see what we mean, look no further than our work for Financial Center Credit Union (FCCU). Like many small- to midsize financial institutions, FCCU wanted to engage a large but untapped prospect base—the demographic commonly known as the millennial.

Millennials may be diverse lot, but most share a few traits. First, thanks to extensive student debt, many are credit-challenged. As a result, they (mistakenly) assume they won't qualify for a loan, credit card or even a mortgage someday.

We knew that group more interested in mobile banking than mortgages would need to be addressed in a different way. We also knew that we had to stand out from the clutter of the online marketing world. So, with the help of new technology and trend reporting, we took a fresh approach to our creative strategy.

One example was our dynamic and—dare we say it—fun ad campaign, “Game of Loans.”  We discovered that not only was the hit HBO drama “Game of Thrones” 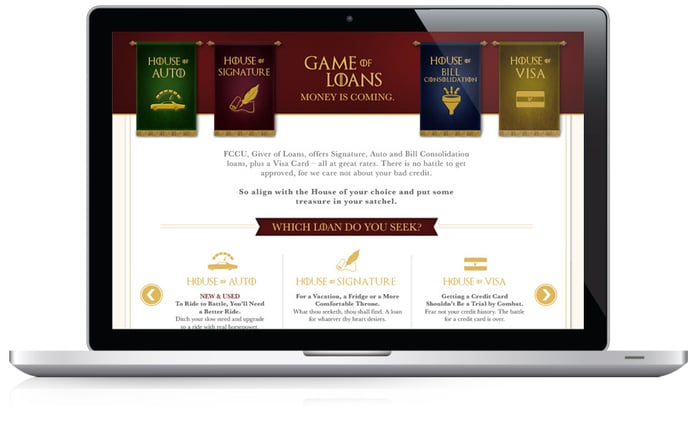 But before we look at some of the key components of the campaign, we should dive deeper into answering the obvious question: Why “Game of Loans?”

The answer is simple: demographics.

Working with FCCU, we identified their optimal buyer persona: millennials who feel they're disqualified for financial services products. And it turns out that “Game of Thrones” was the ideal engagement mechanism.

After all, the show is wildly popular. Its 2015 season premiere drew 18 million viewers, many of whom fall into the 18-34 age demographic. And believe it or not, the show appeals to both male and female viewers—58 to 42 percent, respectively. What's more, the show generates a tremendous amount of online social activity. Its viewers are a tech-savvy bunch.

In a nutshell, the typical “Game of Thrones” viewer maps perfectly with FCCU's buyer persona.

Of course, the campaign also needed to be properly designed. Millennials are pretty selective, and a “Game of Loans” campaign that came across as patronizing, heavy-handed, or just plain dumb would backfire. Fortunately, it didn't. But before we pass along the campaign's wildly successful performance metrics—like any good scriptwriter, we're trying to build the suspense here—let's first take a look at the layout, content and copy.

The voice we utilized was a combination of the “old English” style you’d hear on the show and the modern vernacular used by our audience (“Saveth some scrilla”), while the messaging itself underscored the fact that our loans are not out of reach for credit-challened millennials (“There is no battle to get approved, for we care not about your bad credit.”)

The campaign's inbound marketing techniques—web banner ads, landing pages, and eBlasts—were complemented by direct mailings, letters and t-shirts. This was by design. Our work with financial service clients has consistently shown that a hybrid approach resonates strongly with leads and prospects.

Which brings us to the dramatic climax: The results (Drum roll....)

In short, those who viewed the “Game of Loans” campaign didn't just engage FCCU’s target, it converted them into customers—at staggeringly high rates.

And that doesn’t even take into account millennials who decided that it really was time to switch to a credit union for a personal checking or savings account.

The good news for other financial services firms and community banks out there?

Unlike the heroes and villains of Westeros and Essos, you don't need dark sorcery or magic elixers to attain your ultimate goal (of highly engaged and converted customers). You simply need the palmer process, which creates appropriate branding and messaging based on each client's buyer persona and tracks performance across all campaign touch-points.

Better yet, you may even have some fun along the way.

Want to learn more about how we combine inbound and outbound marketing services to help our clients excel? Just get in touch.

Oh. And by the way: Millennials weren’t the only ones to like it. We got a little love on Twitter from Game of Thrones themselves.